Marie Antoinette was not only notorious for her scandalous behavior but also for her sense of fashion and beauty.  In the following portrait of Marie Antoinette Joseph Ducreux painted at the young age of thirteen in 1769, the artist captures her glowing beauty.  While Marie awaited her nuptials in Austria, this miniature portrait was sent as a gift to the young Dauphin of France, Louis-Auguste, to encourage his affection for his future bride. 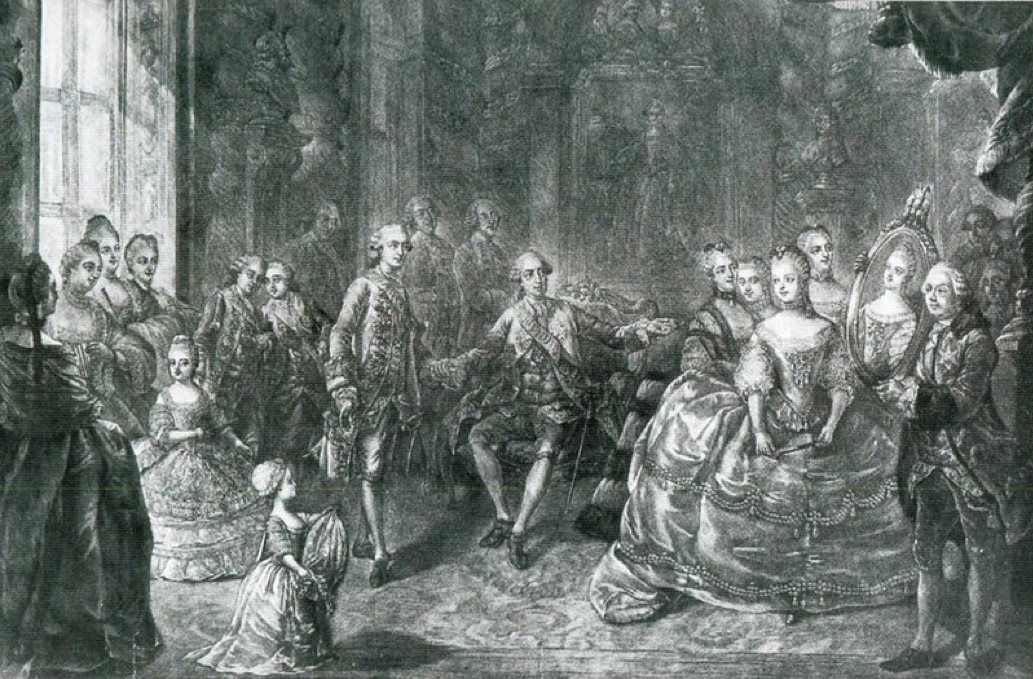 Presentation of the portrait of Maria Antonia of Austria (Marie Antoinette) to Louis Auguste, Dauphin of France in front of Louis XV and the court at Versailles  By Jean-Baptiste André Gautier-Dagoty (1740-1786) [Public domain], via Wikimedia Commons

Marriage at the Young Age of 14 Years of Age

Maria Antonia’s future as Queen of France was negotiated by one of the most politically savvy women in Europe, Empress Maria Theresa, Maria Antonia’s mother.  Through persistent and saavy negotiations by Empress Maria Theresa, the political marriage of her daughter to the heir to the King Louis XV of France was one of the most notable alliances that would strengthen the peace between Austria and France. In the culmination of the Empress’s efforts,  Louis XV formally requested the hand of Maria Antonia for his eldest grandson and heir, Louis-Auguste, Duke of Berry and Dauphin of France.  Louis-Auguste and Marie Antoinette were married on February 7, 1770.

Prior to her engagement, Maria Antonia was primarily raised by tutors, including studying French; however, certain records in France indicate that she was lacking in fluency.  She loved music and had a penchant for the arts, which she later immersed herself in while living at the Trianon where she had a stage theater created for her entertainment:

With a passion for ballet, Marie Antoinette found her studies of history and culture more difficult to master.  In addition to intensive tutoring in the French court customs, Maria Antonia began other preparation for her marriage to the Dauphin.  In particular, Maria Antonia underwent many beauty improvements, including dental surgery to straighten her teeth.

The couple married by proxy to seal the alliance when Maria Antonia was fourteen and Louis XVI fifteen years of age.  Maria Antonia left Vienna, Austria to travel to her husband in France in a grand manner comprised of a fifty-seven carriage entourage, her mother saying that she was sending France an angel.  Maria Antonia’s carriage was a gift sent from the King of France, embellished with vines of white, yellow and rose-colored gold encircling the shimmering glass windows, which were meant to show off Maria Antonia’s beauty.  The roof was a solid gold and contained bouquets of flowers in tri-colored gold.

As the future bride of the Dauphin and Queen of France,  Maria Antonia was required to leave everything associated with her birth country of Austria behind and as such, was met by the King’s entourage on a neutral island in the Rhine at the border of France.  On the island, Marie was taken to a wooden pavilion that was decorated with tapestries by her Austrian courtiers.  Inside the pavilion, Maria Antonia was stripped bare then dressed in French clothing before she crossed to the other side.  In a tearful separation, Maria Antonia was also required to leave behind her beloved pug dog, Mops.  Everything Austrian must vanish from her life.

Next Maria Antonia entered a separate room where she was introduced to French nobility in a ceremony representing her acceptance of life in France, the French culture and heritage, and its history as being her own.  At this moment in time Maria Antonio, Archduchess of the Holy Roman Empire ceased to exist and in her place, a transformed fourteen year-old Marie Antoinette, Dauphine of France and future Queen was born.

On May 16, 1770, Marie Antoinette and the Dauphin were married, with Marie Antoinette later becoming Queen of France and Navarre on June 11, 1775 at the age of eighteen at the coronation ceremony in Reims.

As a subject of fascination, Marie Antoinette became one of the most painted Queens, often sitting for paintings, she herself saying that the artists were not able to capture her true likeness.  Below we find a portrait of Queen Marie Antoinette after she became Queen of France, where she is depicted in an unusual manner with strong imagery as a ruler of France. The portrait was highly criticized as unflatteringly to the Queen.  Some of the unusual aspects of this portrait that received criticism can be seen in the way that Marie Antoinette’s is portrayed as a majestic queen.  For example, her right hand is resting on a globe, which depicts the Queen as worldly and knowledgeable, was one such criticism.

Many of the most recognizable portraits of Marie Antoinette were painted by Elisabeth Louise Vigée Le Brun, one of the last great portrait painters of French royalty.  She painted more than six hundred portraits and became the most famous woman artist in Europe.

The envy of many women at court, Marie Antoinette became a fashion icon with her extravagant dresses and indulgences in new styles. In the beautiful portrait of the Queen below, she was the first to begin wearing her hair styled high on top of her head with decorations more extreme as time went on.

In earlier portraits of the Queen, a subtle style of heightened hair styles and jewels, pearls and ostrich feather adornments are evident in the following portraits.

With encouragement by the well-known Rose Bertin, Marie Antoinette’s personal dressmaker who was responsible for the Queen’s fashion fame, Marie Antoinette sought higher styles of couture.  The Queen engaged a stylist, Léonard Autié, who would eventually become known as the originator of the famous French pouf.  The pouf began when Léonard Autié began piling the Queen’s her hair high on top of her head, eventually incorporating decorative accoutrements to create striking extravagant works of art that took hours of preparation and were copied by the women of Court. 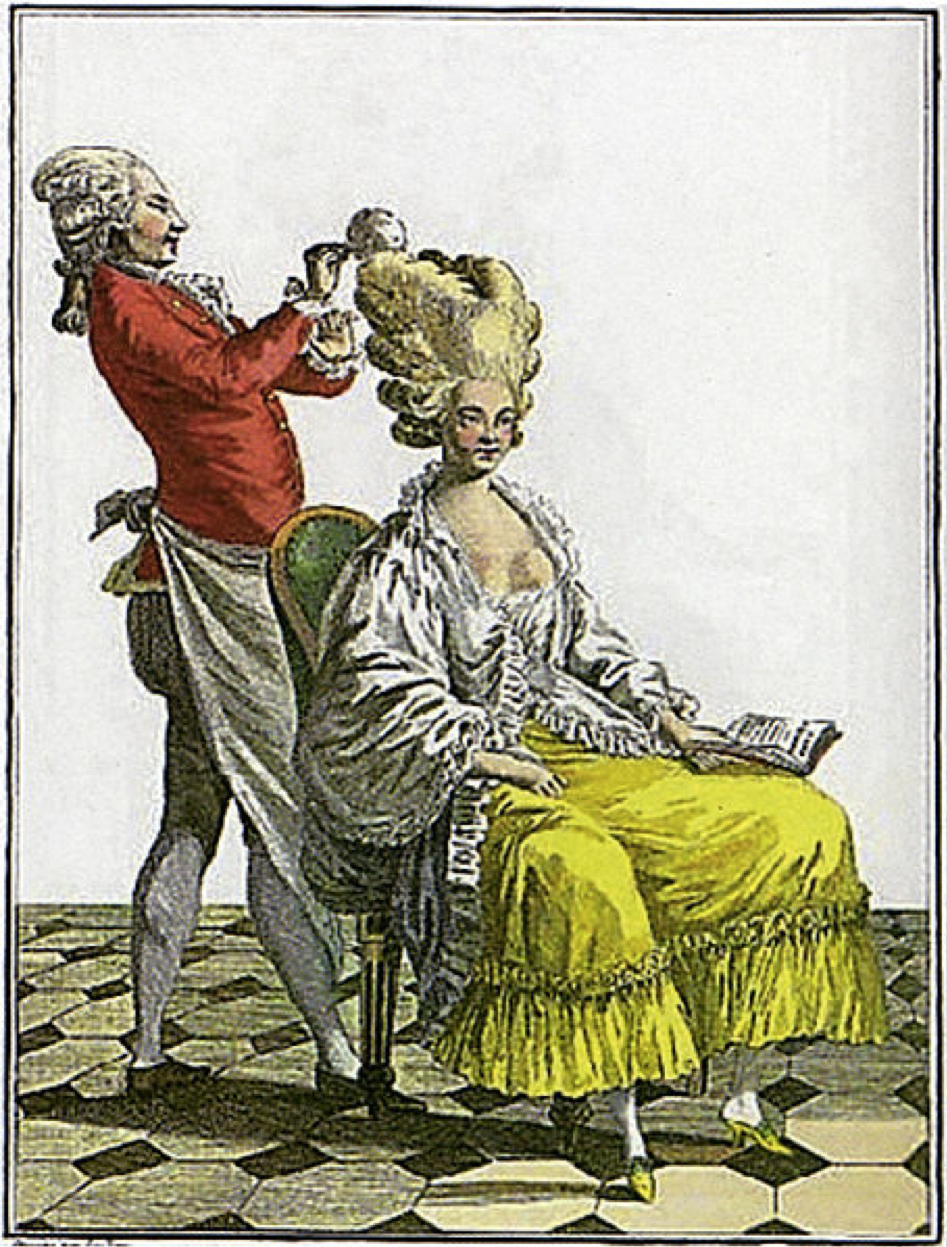 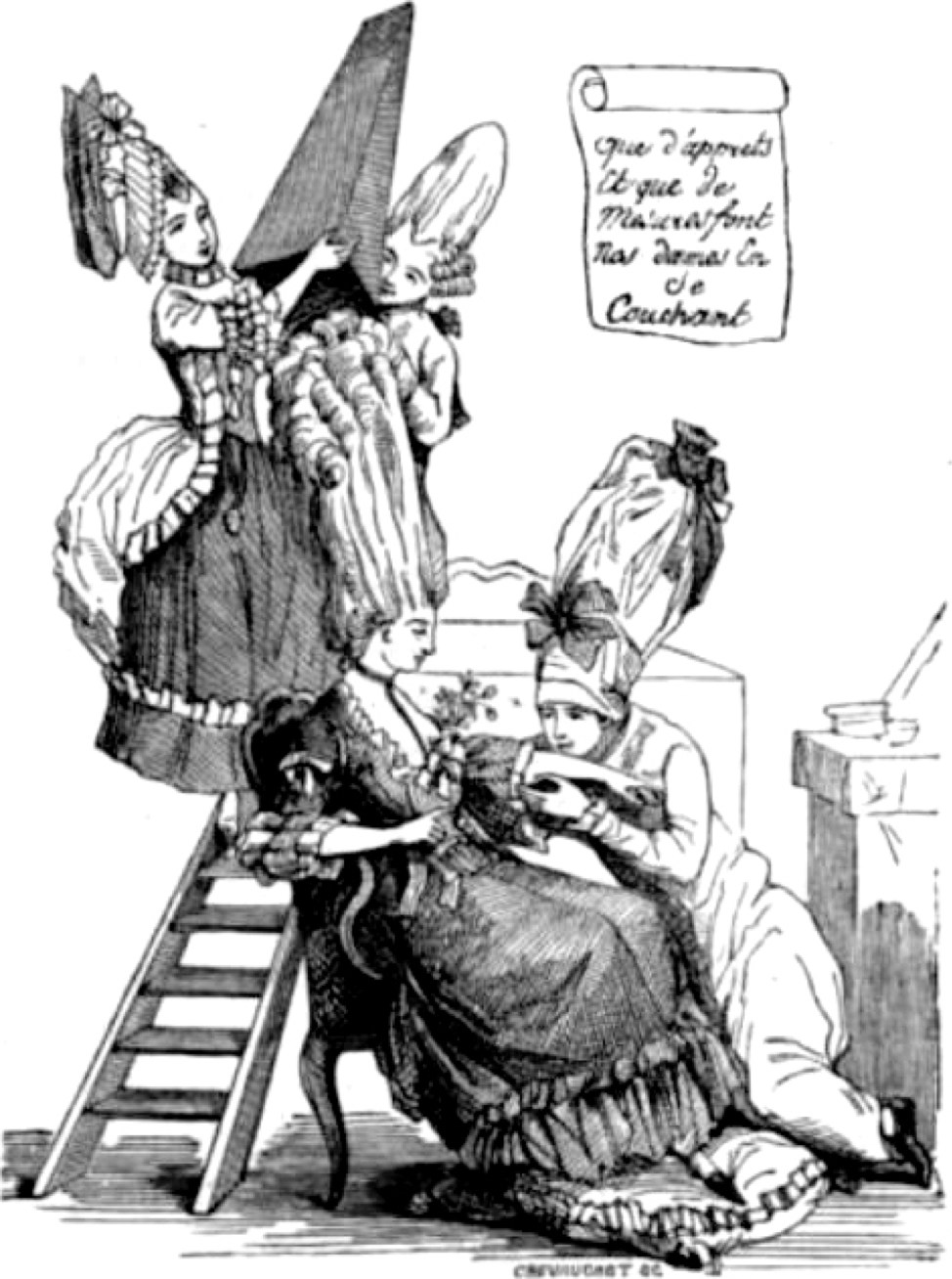 The Queen’s pouf arrangements were the talk of court and ladies copied the style with enthusiasm.  Marie Antoinette was known to have worn fruit, ostrich feathers, and even a frigate ship to commemorate the naval battle of 1778.

Above we see the infamous “La Belle Poule,” a replica of a frigate that was patriotically copied by ladies of Court in honor of the successful navy battle in 1778.

The Queen’s extravagant dresses, hairstyles, indulgence in theatrical plays, and relaxed court etiquette at her private Trianon Palace were eventually her downfall, having cost the people of France exorbitantly and contributing to the bankrupting the country. The events that led to Marie Antoinette being guillotined are a fascinating story, one which even includes the cursed Hope diamond.

Stay tune and feel free to share.  May you have an enjoyable day.

View all posts by Lorrie Anne

1 thought on “Marie Antoinette – A Notorious Beauty at the Court of Versailles, France.” 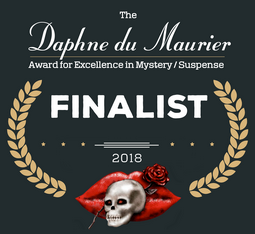 Treat yourself to the royal musical fountains show.

Be A Princess for a Day at the Schonbrun Palace

Rent the royal chambers at the Schoenbrunn Palace in Vienna Austria!  Be sure to plan your next visit and stay a night or two. 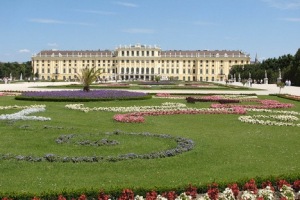